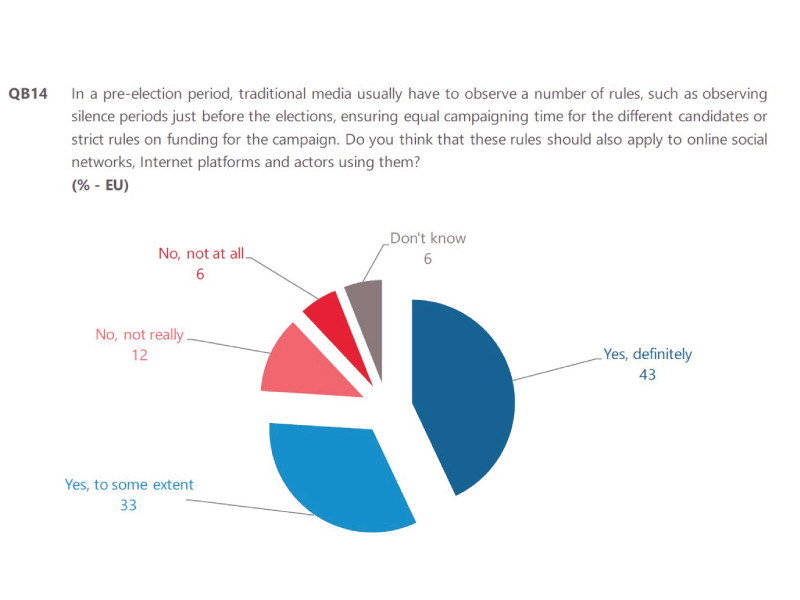 Brussels, 26 November 2018
The European Commission dedicates its annual Fundamental Rights Colloquium to “Democracy in the EU” at a time when Europeans worry about interference in elections.
A new Eurobarometer survey sheds light on the expectations of Europeans for the May 2019 European elections and what would motivate them to cast their vote. It also shows that a majority of EU citizens are worried that disinformation campaigns, data breaches and cyberattacks will interfere with electoral processes.

What Europeans want ahead of European elections
• 42 % of Europeans went to the polls for the 2014 European elections. The figures published today indicate what could bring more Europeans to vote:
• 43 % of the respondents would like to receive more information on the EU and its impact on their daily lives;
• 31 % want more young people standing as candidates.

Concerns related to elections
Today’s figures show that Europeans are worried about interference in the elections:
• 61% worry that elections can be manipulated through cyberattacks,
• 59% worry about foreign actors and criminal groups influencing elections
• 67% worry that personal data left online could be used to target the political messages they see.

But Europeans overwhelmingly agree (74- 81%) on the way to tackle these threats:
• by introducing more transparency to online social media platforms, including on clearly indicating who is behind online advertisement;
by giving equal opportunities to all political parties to access online services to compete for voters’ attention;
• by giving a right to reply for candidates or political parties on social media;
• by introducing the same silence period online as already exists for traditional media.

In September, the European Commission already put forward a set of concrete measures to make sure that next year’s European Parliament elections are organised in a free, fair and secure manner. The measures include greater transparency in online political advertisements and the possibility to impose sanctions for the illegal use of personal data in order to deliberately influence the outcome of the European elections.
Source: European Commission – Press release: http://europa.eu/rapid/press-release_IP-18-6522_en.htm

This website uses cookies to improve your experience while you navigate through the website. Out of these, the cookies that are categorized as necessary are stored on your browser as they are essential for the working of basic functionalities of the website. We also use third-party cookies that help us analyze and understand how you use this website. These cookies will be stored in your browser only with your consent. You also have the option to opt-out of these cookies. But opting out of some of these cookies may affect your browsing experience.
Necessary Always Enabled
Necessary cookies are absolutely essential for the website to function properly. This category only includes cookies that ensures basic functionalities and security features of the website. These cookies do not store any personal information.
Non-necessary
Any cookies that may not be particularly necessary for the website to function and is used specifically to collect user personal data via analytics, ads, other embedded contents are termed as non-necessary cookies. It is mandatory to procure user consent prior to running these cookies on your website.
SAVE & ACCEPT